Portugal Economy: Government debt in October went down to below 117% of GDP, mainly by lowering depo

Gross Government’s Debt in October outperformed, -216bp MoM and 116.7% of GDP; while net Debt underperformed +147bpMoM and roughly 108.4% of GDP. The difference is manly related with the Minfin reducing Deposits at Public Administration: -€9.7Bn MoM to below €20Bn, while the net debt (after deposits) increased €3.7Bn MoM, as a result of October’s poor budget execution. Finally, the new target ratio of debt to GDP: 115.4% should be reached, namely by reducing the amount of Deposits.

The main highlights are the following:

Summing up, the actual MInfin, as was the case one year ago, is reducing Deposits to figures below €20Bn over the 4TH quarter and so, should be able to reach the target Debt to GDP ratio (Maastricht criterium) 115.4%. In periods of low volatility, it should not be a problem, while could be risky when volatility increases. Finally, net debt in October increased €3.7Bn MoM and reflects mainly October’s poor budget execution, deficit €2.7Bn. 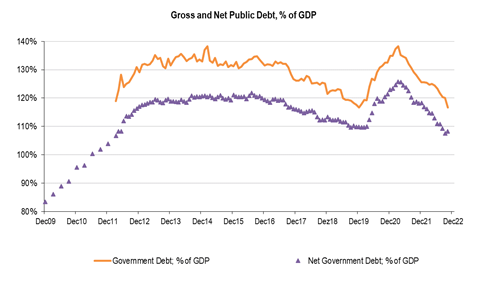 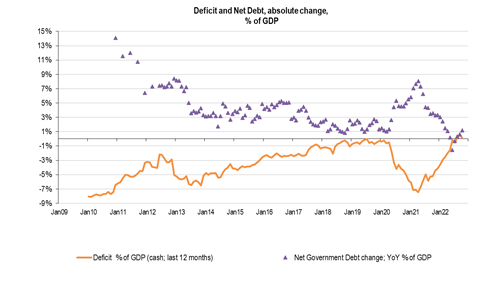